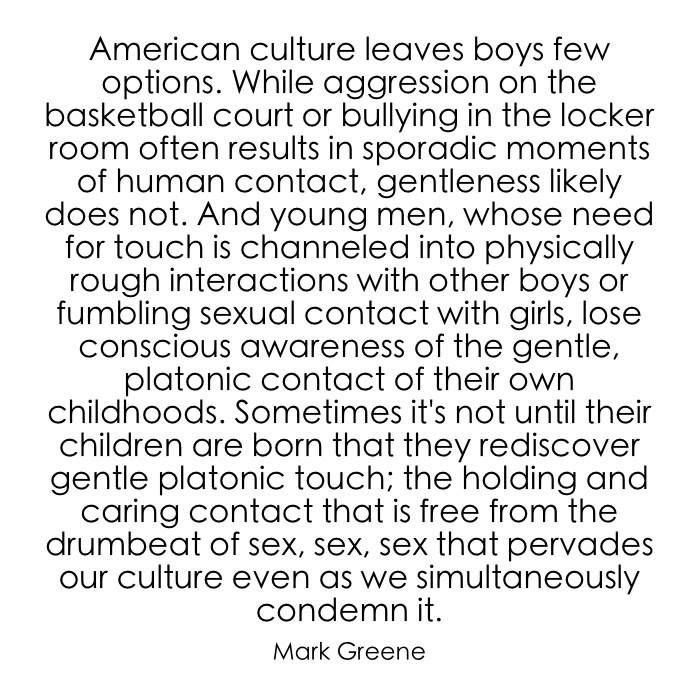 Knowing the deep healing that comes from touch that is not demanding or aggressive is something many boys and men lose in their early lives.  It is a loss that we need to rediscover.

I spent a part of my life learning about healing touch. As a trained Feldenkrais practitioner my touch allowed me to listen to another person’s experience. I learned from this how powerful touch can be in bringing about healing.

The process of learning this was coming to a place in myself where I had to let go of the fear of being inappropriate with someone I was touching. Before this experience I yearned to show affection and receive it in return.  However, I was afraid that touching others (especially women) would be misinterpreted and thought of as sexual. Yet there was this longing to connect with another in this way.

When touching is uncomfortable.

I remember working at an alternative high school in Red Hook Brooklyn and teaching students whose lives were generally in crisis. They showed up to school with the deep wounding of being the children of drug addicted parents and suffering other abuses. For many of them it was uncomfortable to have any contact because it was usually associated with pain. I recall one student, a young woman, who I would gently place my hand on her upper back as I explained some math problem. Depending on her mood she would demand that I take my hand away. “Why are you always touching people?” she would ask.

I know now how important important it is to respect the boundaries of the people in my life. My tendency to touch was not always welcome. I would take this personal in the past. Now I realize that for many people there are wounds associated with inappropriate touch. When this happens any touch, no matter how loving, can be interpreted as invasive.

As I have grown older and come to a better place with myself I tend to reach out to my family and friends with lots of hugs and contact.  It feels soothing to my system and, I believe, to their system as well. There are moments though when I pull back, uncertain of how someone will take my affections.

I still worry about touch with men. Not wanting to get labeled as “gay,” I usually start with the handshake upon meeting a man. I feel guilty typing this. I worry that they will not meet me with the same level of affection that I bring to the hug. So I put out my hand in the hopes that they will feel more comfortable and I won’t feel denied.
I think that boys and men are truly longing to feel the safe, gentle touch of other men. I once spoke at a music festival in Colorado.  At the end of the talk, the men who had attended  all got in a circle and we placed our arms around each other. It was spontaneous and beautiful. I could really feel the connection to these men in that short moment.

I believe for many boys growing up in this culture there is a message that their touch is not welcome. Wether it is coming from girls or parents, boys are often shamed for their attempts to connect through touch. This forces the capacity to touch out of young boys early on. The thought of being creepy is enough to deny any impulse to touch someone.

In an article in the Good Men Project, author Mark Greene, expresses the dilemma for men and touch.

Not only do we men distrust others in this muddled realm of physical touch, years of shaming and judgement have left us distrusting ourselves. Did I enjoy that too much? Am I having taboo thoughts? This distrust leaves us uncertain about touching another human being unless we have established very clear rules of engagement. Often we give up and simply reduce those rules to being in a relationship. We allow ourselves long-lasting comforting touch with our girlfriends or boyfriends. The vast universe of platonic human touch is suddenly reduced to the exclusive domain of one person and is blended into the sexual. That’s a lot of need to put on one person, however loving and generous they might be.

The challenge is to find ways that touch can be brought back into our lives in a way that feels satisfying. More and more the people in my life that I care about are more than willing to hug and receive my touch. My initial discomfort is usually unfounded. When I am able to show affection to a close friend I notice an ease and deeper presence with them.

I believe that men in general are needing ways to discover closeness with each other. I think the lack of touch contributes to the lack of closeness.

We can regain touch by experimenting with it. What is it like to be having a conversation with a good friend and to place your hand on their back for a moment? Was it received? Was it denied? What did you feel?

What is it like to hold your partner’s hand as you are sitting at the movie? Does it feel neutral? Do you feel more connected to him or her?

How is it to touch your adolescent son or daughter? If they are of the opposite sex do you notice any inhibition? What emotions come up for you as a father touching your daughter or son?

Through greater awareness we get to notice our own issues around touch.

How this shows up for me.

I really believe that many people out there are touch starved. At times I feel this way. The longing for more touch is often present with me. Our culture has set some strong boundaries around inappropriate touch for good reason. But what about appropriate touch? Where is the line?

My hope is to take more risks and to show those around me that touch can be appropriate and socially connecting. This takes a lot of awareness and attunement to the person you are considering touching. You want to make sure you have established a rapport that feels connecting and safe. To provide appropriate touch you need to tune into yourself and make sure that the impulse to touch is coming from a place of care and integrity.

I think this can be difficult at first but over time it can be worth the effort because touch can bring a much deeper connection with the people we care about.

If this article is intriguing and you are needing support around something please schedule a free 30 minute consultation with me.

I Wish You The Day You Need To Have – Bryce Mathern, LPC, Owner, Brass Balls Tender Heart

Greene, Mark. (2018, June). The Lack Of Gentle Platonic Touch In Men’s Lives Is A Killer. Retrieved from: https://goodmenproject.com/featured-content/megasahd-the-lack-of-gentle-platonic–touch-in-mens-lives-is-a-killer/

Post Traumatic Growth: How Suffering Can Improve Our Lives

Men And Shame: How It…